The values of Arab culture are unique and often mysterious to Westerners. Even the word Arab can be unclear because people presume Arabs are a single race. However, the term Arab refers to culture and language rather than lineage. Just as Americans are of mixed race and ethnic backgrounds, so are Arabs.

World Bank data for 2017 estimated the population of the Arab world at 414.5 million. Arabs are located in 22 principle countries situated in the Middle East and North Africa (MENA). However, Iran and Turkey, which many people consider Arab nations, are not part of this group because they speak Farsi or Turkish. If you plan to travel to this region for leisure or business, be aware of the values and beliefs that differ from those in Western countries.

When trying to understand Arabic values, you need to take into account the effect of Islam on Arabian society. Although there are other religious groups, the majority religion in the area is Islam. According to the Pew Research Center, 93% of the population was Muslim and Christian made up 4% in the Middle East and Africa.

The Koran is Islam's principle text, which Muslims believe god revealed to the Prophet Mohammed through the Angel Gabriel. It is one of the foundations of Islamic law. Islamic law is also known as Sharia, and it has become part of the constitutions and secular laws of most countries. Some places, such as Saudi Arabia, use Sharia law for all areas of jurisprudence.

In Arabic, Sharia means "the way" and it is the basis for all Arabic values. According to the Islamic Supreme Council, Sharia is divided into five major sections:

Each Arab country interprets Islamic law differently; some follow it more strictly than others. Countries which adhere to extreme interpretations of Sharia, such as stoning, capital punishment and cutting off the hands of thieves, tend to make headlines in the West. This can cause the misconception that these actions are the norm.

Things to Consider When Visiting

There are several things you might want to think about when visiting Arabic countries.

Family is an integral aspect of Arab culture. Families maintain tribal and clan connections in many countries and loyalties are strong, hence the expression, "I and my brothers against my cousins; I and my cousins against the stranger." People know and speak proudly of their genealogy. The extended family celebrates together for Eid al-Fitr, a holiday that signifies the end of the Ramadan. 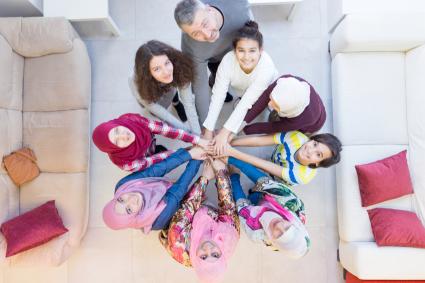 In most Arab countries, men play the patriarchal role. A man is expected to take care of his family financially and feels shame if he is incapable of providing for his wife and children. Again, this is a value from the Koran, which designates men as protectors of women. However, due to changes in society and education, wives frequently help support the family. Sometimes this undermines the role of the man as the breadwinner. Although the father has the final say, parents discuss and plan together before making decisions.

Many women in Arabic countries maintain a traditional role and stay at home. A woman's job is to raise the children, help educate them and manage the house. Western society conceives them as oppressed and unequal to men, but it is important to keep in mind that:

In her book, Women, Power and the Academy: From Rhetoric to Reality, Mary-Louise Kearney states that there is a misconception about the status and roles of Arab females, pointing out that throughout Islamic history many women have reached high positions in government.

Children imitate the example given by their parents. Boys learn to be 'men' from an early age, to protect the women of the family and take on responsibilities outside the house. Daughters are taught to run the house. They receive praise for feminine traits. Children do not leave home until they marry. Often one son will live at home after marriage, to care for his parents' needs.

Respect for older individuals is another value that can be traced to the Koran. In Sūrat al-Isrāʼ, god commands that the elderly are esteemed, treated dutifully, and spoken to gently and politely. Consequently, they are consulted on all matters, even though their advice may not be followed. There is still a tradition of family business, so fathers and sons sit together to discuss everything related to work and the household. The healthcare support system is weak, so young women rely on their mothers and grandmothers during childbirth and in the childcare that follows.

Education is valued, and there is a commitment to improve education. People are proud of their qualifications. When you meet parents, they will name drop about the schools and colleges their children attend, boasting about their accomplishments and expecting you to show you're impressed. Whenever possible, the poor send their children to school, struggling to keep them in education and scrimping to pay for private tuition in the hope that they will attain school certificates or even university degrees. You should realize that for these families reading and writing is an achievement.

In the Arab world, privacy is another cultural value, which stems back to the Koran. People do not discuss their concerns outside the family. If a person talks disparagingly about a relative or speaks of private affairs to an outsider, he is frowned upon.

Privacy extends into the way homes are built. There are parts designated to visitors and areas where guests are never invited to venture. Often the house's construction allows female guests to meet wives and daughters in their apartments. Men will entertain friends in the salon, or in their own section of the house. If the home is small, they time meetings so that visitors do not have to see family members with whom they have no business. Alternatively, appointments are arranged outside.

Everyone has heard of Arabic generosity and hospitality. When traveling anywhere in the Arab world, it is a matter of honor that you receive a warm welcome. To maintain good relations be aware of the correct behavior.

When invited to eat a meal with Arabs, you will find differences in etiquette.

Food is important in the Arab culture. A host will offer their guest the best they have, and they put their love and appreciation into their meal. The menu will include a diverse variety of foods such as lamb or fish. Appetizers might include olives, nuts and raisins. Bread is also very important to this culture. In fact, the Arab American Institute states the refusal to break bread with someone is considered a betrayal. However, since pork is forbidden in Islam, you'll rarely see this on the table. 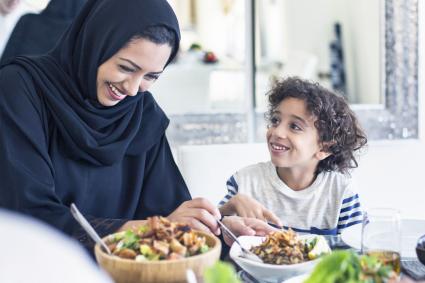 In the Arab world, most people are conservative and modesty is a positive trait spoken about in the Koran.

While dress codes and customs differ from country to country. In some countries, both genders wear national dress and women are required to wear hijab, a veil or burqa, and robes which hide the outline of their bodies. In others, there is little difference between their clothes and western-style clothing. The most important areas to cover for the sake of modesty are the top of the shoulders and arms. However, modern women wear short sleeves, skirts and tight jeans.

Basic dress tips to follow when traveling to the Arabic world are:

Whether for business or pleasure meeting people from the Arab world is an enriching experience. Knowing more about cultural values and how to behave in a foreign land is helpful and reassuring, not only do you realize the differences between their culture and your own, but you also understand the similarities and appreciate how much people of different nations have in common.