The oldest known family names in American history were documented on ship's passenger lists that date back to the 1600s and the Jamestown and Plymouth Colonies.

The Settlers of Virginia's Jamestown Colony

Jamestown, founded in 1607, was the first American Colony. The expedition arrived on May 14, 1607, with 104 male passengers. In January 1608, 100 new colonists, including two women, arrived to find only 38 survivors. It was more than a year later when more women and children sailed to join the original settlers.

Most of the original male settlers either returned to England or died without having children. There are only two that are known to have descendants living in the United States today. These two family names are undoubtedly historical contenders for the oldest known family name in American's history.

Robert Beheathland (Behethland or Betheland) was identified in early records as a "gentleman." The family names that can be traced back to Beheathland include Bernard, Crew, Withers, Hooe, Massey, Lane, Griffith, Berryman, Storke, and others.

William Spencer was identified in early records as a farmer. Among his descendant are families bearing the names of Sheppard, Cokerham, Hart, and Newsome.

Most of Virginia's oldest families descend from settlers who landed at Jamestown after 1609.

John Rolfe arrived in Jamestown in June 1610 aboard the third supply ship sent to Jamestown. Rolfe married the legendary Pocahontas. They had one son, Thomas Rolfe. There are many Americans that can trace their family names back to John Rolfe and Pocahontas. Among them are Bolling, Gay, Perkins, and Morenus.

Other Old Family Names in Virginia

The Randolph and Wormsley families have been in America since the mid-1600s.

New England's first permanent settlement was the Plymouth Colony. The merchant ship, Mayflower, left England carrying 102 passengers that consisted of both men and family groups, and arrived at the beginning of winter, November 1620. Even though half of the Plymouth colonists died during the first winter, some of the oldest and most historical family names trace back to the Mayflower and the Plymouth Colony. 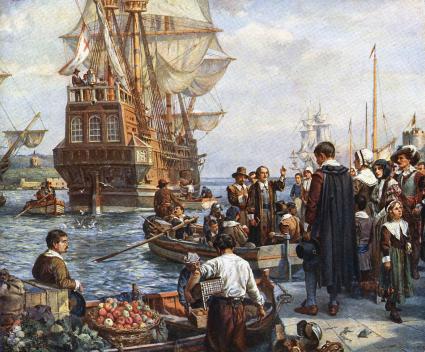 The Carver family name dates back to John Carver, who was the first governor of the Plymouth Colony.

The Bradford family name traces back to William Bradford, who arrived on the Mayflower and became the Plymouth Colony governor when John Carver died.

The Brewster family name traces back to William Brewster, who was the Ruling Elder of the Plymouth Church until he died in 1644.

The Standish family name dates back to Myles Standish, a soldier of fortune who arrived in America on the Mayflower. He was the Colony's only military officer and served in that capacity until his death.

The Alden family name traces back to John Alden, who arrived on the Mayflower and became a prominent and influential colonist.

The Fuller family name dates back to Samuel Fuller, the primarily self-taught physician and surgeon of the Colony.

The Allerton family name dates back to Isaac Allerton. In the Plymouth Colony, he was the second in authority to William Bradford during the Colony's early years.

The Soule family name traces back to George Soule, who arrived in the Plymouth colony as a servant to Edward Winslow and was a signer of the Mayflower Compact.

The Nelson family name can be traced back to William Nelson, who came to Plymouth before 1636 and had land granted to him in August 1640.

The Sherman family name can be traced back to William Sherman, who lived in Plymouth from 1630 to 34. Sherman did well after he arrived in Plymouth and left to his children a rich inheritance of lands.

What's in a Family Name

There's history in a family name. If your family name is among those listed above, perhaps it's time to explore your family history. You could be an ancestor of one of the brave individuals who made the intrepid voyage to America and settled in the Jamestown or Plymouth Colony.