Puerto Rican families are typically confused with Latino culture, but Puerto Ricans are a diverse mix of ingenious Taino and Spanish colonists. They have a rich and colorful history that places vital importance on family culture because of the extended family system. Family is so important that they have a word for their strong family connections "familismo." Their relationships develop outward from their family. And, the raising of children is considered a family affair.

The Importance of Family

Puerto Rican culture places a high level of importance on family and family honor. And not only your immediate family, but aunts, uncles, and cousins. Puerto Rico's family culture follows an extended family model. Therefore, families have close ties with relatives and parents. According to the ELL Assessment for Linguistic Differences vs. Language Disabilities, many households have up to three generations living together, and family is essential to business interactions. Therefore, you could have aunts, uncles, grandparents, and children living under the same roof.

Historically, Puerto Ricans married at a young age, and the man was the head of the household. The gender roles within the family were also traditional. However, since the 1900s, female leaders of the household have become more common. The importance of children within the family can't be downplayed either. Children are integral to the family unit and live at home until marriage. Even then, they don't typically move too far away.

Though times are a changing in this culture, the raising of children and their socialization is still mostly done by the mother. Raising children might not take a village, but it definitely takes a family. Many generations take part in the rearing of infants and children if the mother and father both work. So, it common to see the grandparents or aunts partaking in raising the children of their families. Additionally, their input on how to raise children is valued.

Respect for the elderly is a must in Puerto Rico. According to ELL, elderly family members aren't typically placed in nursing homes but instead live with their grown children. Since family ties are deep, elderly parents take part in the household's decisions and raising of the children. Their opinions are sought after and respected. 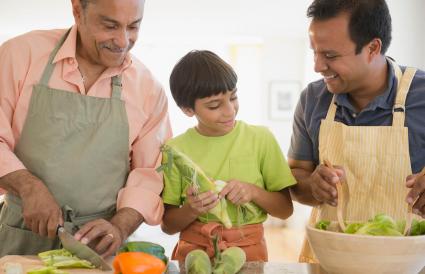 What Are Puerto Rican Values?

While the family is essential, respect and education take top shelf in Puerto Rican family culture. Caregivers teach children to respect their elders and themselves. The word for it in Spanish is "respeto." This refers to the obedience, etiquette, and self-assurance an individual learns from their family through observation. It's a critical element of family honor and plays into family loyalty. And, it's essential to maintain this level of respect through all your relationships. This type of education for a child is as important as a formal education.

Family values don't stop at the door to a house. They extend into business as well. Puerto Ricans prefer to do business with those they trust, so family connections become important. Additionally, business connections outside the family become as important as family. Therefore, you can expect to have informal meetings and dinners to establish a bond.

While gender equality is on the rise in Puerto Rico, females are still underrepresented in leadership roles. Additionally, you can come across "machismo", which is excessive masculine pride. This behavior leads to fierce pride and boastfulness to those they feel are beneath them. Visualize this as cat calls and general chauvinistic behavior within a workplace or even on the street. However, there is also a female form of this called "marianismo."

Traditional family roles in Puerto Rico can still be found; however, its dynamic is changing with its affiliation with America. Therefore, family honor and influence is still significant, but it is changing. You can find more and more households with two working parents dividing the household chores. Additionally, single-female lead households are common as the divorce rates climb. Children remaining single into adulthood has become more common in recent years, as well.

Family is the building block of cultural identity and awareness in Puerto Rico. Using an extended family model and strong emphasis placed on respect, Puerto Rican's value family achievements and honor above the singular individual.