The Kingdom of Scotland was formed in the 9th century, so the country's traditions have developed over 1200 years. Like most cultures, many of the traditions in Scotland's culture revolve around its extensive history. Food and music play a big part of traditional celebrations, which tend to focus on holidays and festivals.

Scotland has some holidays that are unique to the country, as well as some that are shared with the rest of the world.

Guy Fawkes Night, or Bonfire Night, is celebrated on November 5. Guy Fawkes was a Catholic who tried to blow up Parliament in the 1600's using gunpowder. He was caught and executed by burning. Every year, before Halloween, Scots make an effigy of Guy Fawkes using clothing stuffed with straw and a pumpkin head. After Halloween, they wheel the scarecrow around the neighborhood calling, "A penny for the Guy," attempting to collect pennies to buy fireworks. On November 5, the effigy is burned over a large bonfire, followed by a fireworks show.

Halloween is similar to Halloween in other parts of world. On October 31, children dress up in costumes and go door-to-door, trying to get candy. In Scotland, this is called 'guising' (from the word 'disguising'), whereas in the U.S. it's called trick-or-treating. 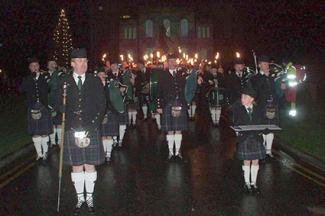 St. Andrew's Day, the national day of Scotland, is celebrated on November 30. Saint Andrew was one of the twelve apostles of Christ. This holiday is celebrated with traditional Scottish food, music, and dancing. St. Andrew's Day is the start of the winter season, which also includes the holidays of Christmas, Boxing Day, Hogmanay and Burns Night.

Hogmanay means New Year's Eve and is more important to some Scottish people than even Christmas. As having a dirty house at midnight on Hogmanay is considered bad luck, it is common to spend the day cleaning. At midnight, people stand in a circle, cross their arms, hold hands with the people next to them and sing Auld Lang Syne, an original Scottish song. Another Hogmanay tradition is called first-footing. The first person through the door at midnight should be male, with dark hair, bearing a gift of coal, shortbread, salt, black bun or whisky. This is said to ensure that the household will be safe, warm and have enough food for the winter. Some families go first-footing until the wee hours of the morning. 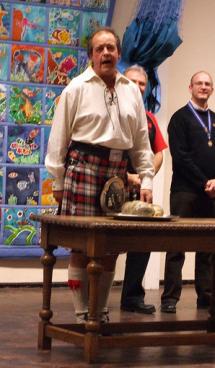 Burns Supper is a holiday which tributes famous Scottish poet Rabbie (Robert) Burns and is held on January 25, the anniversary of his 1759 death. One of his most famous poems, The Address to the Haggis, has become central to the celebration of Burns Supper. The ritual consists of reading Burns' work and eating a meal that includes, of course, haggis.

Valentine's Day, which is February 14, is similar to Valentine's Day celebrations in other parts of the world. Interesting to note, however, is that the remains of St. Valentine are believed to rest in Glasgow.

Mother's Day - or Mothering Sunday - is on the fourth Sunday of Lent, or three weeks before Easter Sunday. Mother's Day is believed to have begun in a time when children were forced to apprentice and work away from their families. Masters would give children one weekend off in order to return home and visit with their families. Although held at a different time than in other countries, Mother's Day celebrations in Scotland are similar to those in other countries around the world.

Easter Sunday, being a Christian holiday, is similar to Easter Sunday celebrations worldwide. One tradition to note is that Easter dinner in Scotland almost always consists of lamb.

There are a number of traditional Scottish foods:

As NPR points out, "It's no surprise that whisky is the national drink of Scotland." Scotch whisky has been distilled in Scotland for centuries. According to The Scotch Whisky Experience, the word whisky originates "the Gaelic 'uisge beatha', or 'usquebaugh', meaning 'water of life'" and the beverage can be traced back to a 1494 official reference, though some think it was developed way before that.

Toasting with Scotch whisky remains a popular tradition in the country. In Scotland, it is the duty of the host to get the gathering off in the "proper spirit" with a toast - a great place to show off one's brogue.

Not every traditional drink has to have a centuries' old centurly or contain alcohol. Irn Bru is a bright orange carbonated soft drink that has higher sales than both Coke and Pepsi in Scotland. According to Derek Heron, a native and resident of Scotland, "Irn Bru is regarded as Scotland's other national drink." It is described as tasting sweet like bubble gum with a tingly feeling like popping candy. It has a hint of vanilla/citrus flavor and a slightly metallic aftertaste. Some even claim that it's a hangover cure. 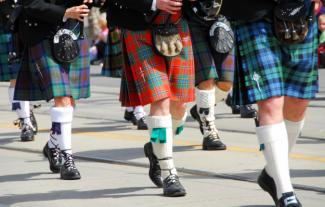 Men tend to be the ones to wear kilts, although women do wear kilts now, too. Traditional women's kilts tend to be more like calf-length tartan skirts and were traditionally only worn as part of a uniform or by a member of a pipe band. Modern style, however, shows women's kilts more similar to men's kilts in lengths from mini-skirts to ankle-length.

There are plenty of festivals in Scotland, where you can experience the country's rich culutre and traditions for yourself.

The majority of Scotland that practices religion practices some form of Christianity. According to the Scottish Social Attitudes study, twenty percent of Scots report belonging to the Church of Scotland, the largest protestant church, 12 percent report being Catholic, and 12 percent report being some other form of Christianity. However, 54 percent of Scottish residents claim no religion.

Other religions are also represented, especially the Jewish religion. With the number of immigrants entering Scotland, Hinduism, Buddhism, and Islam are also present. There are also a number of atheists and non-practicing Christians in Scotland.

Scotland's culture and traditions are deep-rooted and war-ridden. The land that is now Scotland was originally inhabited by a people known as the Picti. Scotland has a long history of battle, including fighting the Romans, the Vikings, and the Norwegians. Scotland was also raided and settled by the Gaels (also called Scoti) in the fifth century and taken over by the English in the 12th century. In 1707, the Acts of Union united Scotland, England, and Wales as Great Britain. With such a rich history, it is easy to see why so many of Scotland's traditions run deep.