While it is possible to refer to a number of extended family members simply as "cousins," you might find yourself wondering "Exactly what are first and second cousins?" Use simple cousin charts to help you better understand geneaology terms like "first cousins," "second cousins," and "first cousins once removed."

Who Are Considered First Cousins?

First cousins share a grandparent, either maternal or paternal. The children of your uncles and aunts are therefore your cousins, or first cousins. If members of your family were adopted, then your first cousins might not be blood related to you. 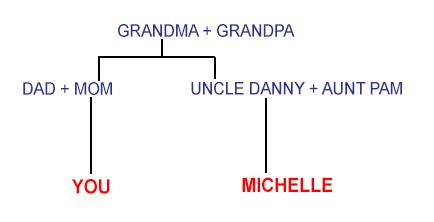 You and Michelle are first cousins.

The easiest way to understand the relationships between cousins is with a hypothetical example. This illustration keeps the family tree as simple as possible, ignoring most siblings and the extended families of spouses who have married into the reference family. With this hypothetical example, you and Michelle are first cousins because you have the same grandparents.

Who Are Second Cousins?

You and Ashley are second cousins.

With this hypothetical example, you and Ashley are second cousins. This is because the closest common ancestor that you share is your great-grandma. Ashley's grandpa, your great-uncle, is your grandma's brother.

What Does "Once Removed" Mean With Cousins? 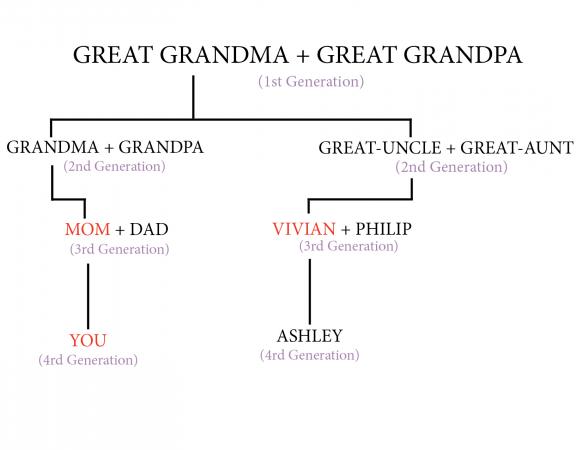 You and Vivian are first cousins once removed.

What Does "Twice Removed" Mean With Cousins? 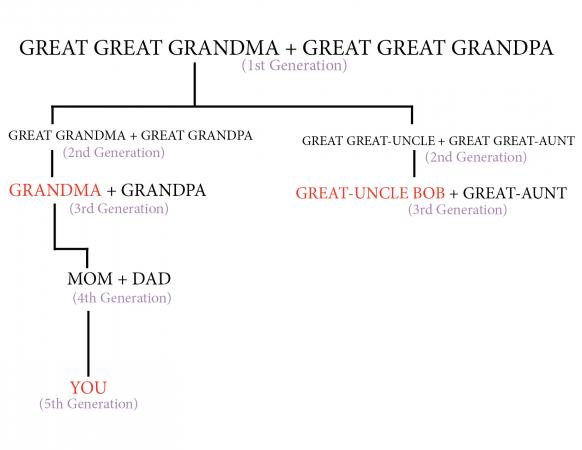 You and Great-Uncle Bob are first cousins twice removed.

The terminology used to describe the relationship between cousins can be further extended to reflect as many generations as needed including third cousins, fourth cousins, and so on. Cousins can also be related by blood or by marriage. To determine if you're cousins by blood, you'll need to know who birthed each family member to follow the blood line.

Can Cousins Get Married?

Cultural norms and laws vary from state to state in the U.S. and from country to country about whether first or second cousins can get married. Marrying a second cousin is legal in the U.S., but most U.S. states don't allow legal marriages between first cousins. While marrying a first cousin doubles your risk of having a baby born with a birth defect, that percentage is really only a 4-6% chance. Second cousins who have children together have no more risk of having a child with a birth defect than any other unrelated couple.

Keep Track of Your Cousins

Track your cousins as far back as desired by starting to make a family tree. You can purchase family tree software or use a free family tree template to draw your own family tree. You might be surprised who you discover you're related to when creating family archives. For example, it was revealed in 2007 that Dick Cheney and Barack Obama are actually related - they're eigth cousins, albeit only by marriage.

2
Comments
© 2006-2021 LoveToKnow, Corp., except where otherwise noted. All Rights Reserved.
Resources, Advice & Tips for Covid-19
Read More
What Are First and Second Cousins?