War increases the deployment tempo, thereby separating military families as the military member leaves to serve elsewhere. Any time a family member has to be away for extended periods of time, it can cause negative stress on the family unit, but particularly so when the deployed family member is subject to potentially dangerous conditions. The family members at home are repeatedly reminded of the potential danger as news reports of conflicts flourish, making it difficult to avoid a near-constant state of worry.

Military families are subject to frequent moves, sometimes leaving spouses in a situation where there is no established support group of friends and family. Though most military installations offer support groups and other resources for family members left behind during a war deployment, loneliness is still a real possibility. A research article published for the College of Nursing, University of Wisconsin Oshkosh notes that wives, in particular, may feel "forgotten" when their husbands deploy.

It is important to note that while there are indeed husbands who are military spouses, the study above focused on wives as they greatly outnumber husbands as civilians married to military.

Increased Stress for All Family Members

The acute stress of having a family member deployed during wartime is not limited to spouses; children and other family members worry about the deployed member's health and well-being while also trying to pick up the slack of having a family member gone. An article published for presentation at the 2011 American Counseling Association Conference and Exposition says that spouses left home during a deployment can develop stress-related mental health issues including "anxiety disorders, depressive disorders, and sleep disorders, to name a few."

Children of the Deployed

For children - even very young children - having a deployed parent can be stressful enough to merit intervention from a mental health professional, says an article published in the American Journal of Orthopsychiatry. In fact, the article additionally asserts that a parent deploying to war may have lasting developmental impact on a young child, particularly if the child's trauma is not addressed and treated.

Parents of the Deployed

Blue Star Mothers of America, an organization that offers community and support to parents of service members, warns parents that having a deployed child can cause increased stress. This anxiety may even reach the point where the parent will have difficulty concentrating or completing tasks.

Mental Health America, a non-profit organization focused on mental health, offers tips for dealing with the stress related to having a loved one deployed, including:

Military OneSource will provide military dependents with authorizations for care for therapy when needed. The process is simple and confidential.

Though service members typically earn additional pay while deployed for war in the form of hazardous duty pay, family separation pay, or tax-free income depending on location, the financial strain of the at-home spouse needing to stay home to care for children or other family members can have an impact on the family finances. Most military installations offer budgeting help pre- and post-deployment, helping families to avoid additional stress caused by financial problems resulting from the deployment.

Research published by the National Institutes of Health suggests that military members without financial strain may have an easier time recovering from a deployment to a war zone. 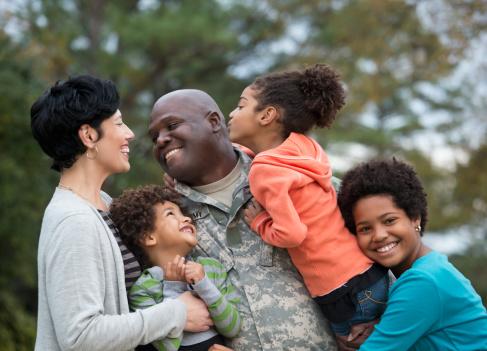 Contrary to what many people may think, the stress of a deployment doesn't end the moment the military member returns home. The National Council on Family Relations urges military families to recognize that reintegration can be difficult in spite of the happiness of the military member's return. Family roles must be reestablished as the family learns to function once again with the military member present.

Service members serving at war time may additionally have to deal with the effects of Post-Traumatic Stress Disorder (PTSD), making it even more difficult to adjust to life back home. PTSD can be a potentially serious mental health issue and should be treated promptly and effectively. The U.S. Department of Veterans Affairs says that families are negatively affected by a military member's PTSD, and therefore this is a family issue as opposed to something the service member should deal with on his or her own.

Though it is difficult to think positively about a family member heading off to war, potentially positive aspects can help deal with the stress of deployment:

Myriad resources are available for military families trying to deal with having a service member deployed. The military community recognizes the potential stress involved and provides help when available. Contact the Family Support Center to find out about resources specific to your area.