The traditional Brazilian family consisted of a husband, wife and children, and traditional values supported this family structure. However, the family structure has changed somewhat in recent times. Single-parent households are on the increase, and it is quite common to find families with two working spouses. Even with these changes, family values run deep.

Family is the foundation of social structure in Brazil.

In the past, Brazilian families tended to be large. When a couple married, the individuality of that couple as a new household was recognized and respected. However, newly married couples were also expected to maintain close family ties and proximity with their extended family, including godparents and godchildren. It is also common for several generations of family to live with one another. Three generations is actually the norm.

Family gatherings were, in good times, opportunities for socializing, but these relationships also provided a network which people could turn to in times of trouble or need. These close-knit family ties are still encouraged in Brazil, but how much interaction occurs between family members today is influenced by social and economic factors, just as it is in America and many other parts of the world. Additionally, family comes first in this culture. While Brazilians work hard, their family is more important than their career.

Close family ties also carry over into the business world as well. Nepotism is actually encouraged and looked at as a way to hire employees you know and trust. However, it is such "positions of trust" that also opened the door for corruption in the Brazilian government.

Originally, Brazil's social structure was primarily patriarchal in nature. Men were typically in positions of power and head of the household. Additionally, a sense of strong masculine pride was, and in many cases, still is common within this culture. Women were relegated to domestic duties and often lacked formal education. However, women were also the glue that helped hold the family together.

Families typically gather together for meal times; lunch is usually a substantial meal. Traditionally meals were prepared from scratch, and lunch and dinner ended with a strong cup of coffee. The type of food served varies by region, though rice, beans and root vegetables are staples. 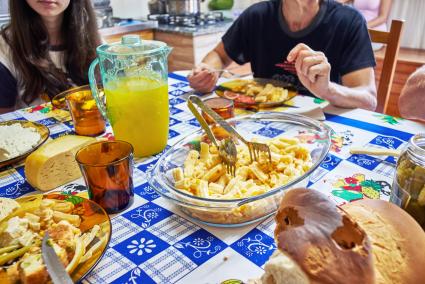 Prior to marriage, Brazilians typically date their spouse for several years. Additionally, many people will marry within their own specific social class. This is due the fact that Brazil is quite class conscious. However, it has been noted that child marriage is still happening in Brazil. According to Girls Not Brides, in Brazil, the legal age for marriage is 18, or 16 with parental consent. Girls Not Brides also states that some girls are even getting married younger due to pregnancies or when a man is trying to avoid a sentence of statutory rape. Brazil has not made substantial progress on this issue and and child marriages are an ongoing human rights concern. Promundo, a Brazil-based non-governmental organization (NGO), noted that Brazil was ranked 4th in the number of child marriages by 15.

Grandparents and the elderly are seldom put in a nursing home; instead they most often live with their children. Their input on important family discussions is encouraged and sought after. Additionally, respecting elders and treating them well is also part of the law in Brazil. It is expected to allow seniors to cut in line or give up your seat for them.

In Brazil, personal values are important. In their relationships and families, people appreciate honesty, respect, trust and patience. Warmth and compassion are valued among families, along with respect for all family members, including children. This tendency towards compassion is perhaps what helped Forbes to rank Brazil 11th among friendliest countries.

Over the last 30 years, family values in Brazil have undergone significant challenges along with changes to the traditional nuclear family.

Changing Role of Women and Families

Today, many Brazilian households have two working spouses; in fact, about 42 percent of women work, and the number of single-parent households has increased. Family is still valued highly, but divorce and marital separation are much more common. Many women are now the head of their household, and the dynamics of the family often include children from more than one marriage or other union. Smaller families are also becoming more common. There is a trend among young people of living elsewhere after graduation possibly alone or with roommates. Families are also moving to urban areas for more career opportunities and living away from extended family.

With the societal changes that have touched Brazilian culture, the family structure has somewhat changed, but the values that encourage close family ties remain. Even today it is not unusual to have three generations living in the same house. According to Commisceo Global, other important family values in Brazil that have withstood cultural changes include:

The Value of Family

While modern family makeup may differ from the traditional Brazilian family structure, in some instances, Brazilian family values have survived the changes. Family is valued in Brazil and close-knit relationships still provide a network of support. The main challenge to this closeness today deals with children who graduate from college and live elsewhere and family members who relocate for work and no longer live near their extended families.