Every culture has a unique set of values, traditions and norms. The general culture of Mexican families has a strong foundation in unity. As with any culture, family life is as much individualistic as it is communal.

Origins of the Mexican Family

Family in Mexico has long deep roots that go back even further than pre-Columbian eras. To better understand current Mexican family culture it is important to take a look at its past.

Aztec, Mayas, Olmecs, Zapotecs all had well-organized societies where the family was a vital component. Family in pre-Columbian times dictated the societal structure and played an important part in maintaining order in communities. Indigenous Mexican family structure tends to be:

Spanish colonization went hand in hand with indoctrination brought by the Catholic missions. However, Catholic influence did not bring about great changes to the existing family structure, mainly because the values were similar. Rituals and spiritual values were already an important part of pre-Columbian families in Mexico, so it is not surprising the values merged so readily.

Changes that did happen included:

Catholic influences mainly changed the spiritual practices and the social structure into one where the Church had the authority. Mexican family after the Conquista was still patriarchal, extended, organized and structured. This order is the basis for the traditional Mexican family values that are observed today.

Mexico has traditionally been home to a patriarchal family structure. There are defined roles for mothers, fathers, brothers and sisters in Mexican families.

Marianismo (stemming from the Virgin Mary model) was the term for the distinct role of women in Mexican family culture while machismo was the term for the traditional role of men. Women typically portrayed a submissive and dependent role in the marriage relationship as per Catholic teachings, and men were given the "leader of everything" role as per ancient indigenous customs combined with Catholic tradition. Today, this role is called jefe de familia and is used for the person that is the head of the household.

A mother was the heart of the family. She cooked, cleaned and cared for the children full time. Similar responsibilities were also expected of daughters as it was their job to learn how to be a woman from their mother.

Fathers took charge of family decisions, and their authority was rarely challenged by either the mother or children. Machismo is defined as the type of behavior corresponding to traditional ideas about men being strong and powerful. This ideology still hinders gender equality progress in Mexico, but it's not as prevalent as it used to be.

Today, parenting roles are a bit more egalitarian, but it greatly depends on the upbringing of both parents and the roles they agree to take on within their family.

Familismo, as reported by the CDC, is the value of family over individual needs. Multigenerational families living in one household were common in Mexico. Several changes led to generations separating households. These changes included:

Although extended families may live in separate households today, family is the number one priority among many modern Mexicans.

Extended families could be large as couples could have 10 to 12 children. Even after the 70s, having five children was considered modern and a sign of contraceptive use. In addition to the children, at least one or two sets of grandparents, and sometimes, even more family members (such as siblings and their spouses), lived within one household.

Multigenerational families would appoint a leader and decision maker (usually the breadwinning male). According to EveryCulture.com, decision making was made by this one leader or jefe de familia followed closely by the other elder males, the mother (wife of the breadwinner), the wives of the elders, the younger male members, and finally the girls of the family. Although family size has decreased, the roles have changed, and the decision-making process has evolved, the term jefe or jefa de familia (family leader) is still used, even by census authorities. 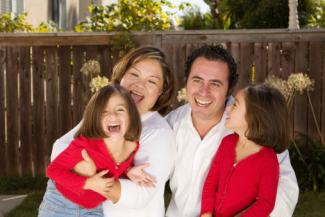 Everyculture.com suggests while some Mexican families still follow the traditional family set up, many others follow family trends similar to those in the U.S. and Europe. Notable changes include:

The major changes seen in family structure over the last 50 years come from the empowerment of Mexican women. Although gender inequality is still an issue, the fact that many women are now household leaders is evidence of progress in this area. Changes that made this newfound empowerment possible include wider access to contraception increased opportunities in education and the workforce, and the need of the workforce to make use of its women.

The first change in culture was the use of contraception. Catholic family values insist a couple have as many children as God grants. However, this could mean to a young bride in rural Mexico in the 50s, the possibility of rearing 10 to 12 children, after losing one to three children from pregnancy complications and other factors. Of course, the mother would have to be entirely devoted to the family. Traditional family structure made sense. Men and boys worked the field and farm, women and girls took care of the household.

Although in 1951, a Mexican scientist, Eng. Luis Ernesto Miramontes became one of the three "fathers of the pill," it wasn't until the mid-70s that the pill and other contraceptives became more readily available to women. This enabled women to plan for a smaller family and to take better care of themselves and their family. After contraception had become widely available, five children per family became an ideal number for many women. However, the ideal number of children has continued to decrease until one to two children per family became the current ideal.

While the country still has a lot of machismo attitudes, women dropped the marianismo attitude when it was no longer feasible. Up until about the 80s, it was fairly common for women with means to attend university without a serious intention of joining the workforce. However, the major economic crisis of the early 90s moved more women into the workforce as couples tried to earn enough to support their families. This revolutionized how people perceived education. Since then, 40 to 50 percent of women nationwide, both from rural and urban origin, have steadily earned their degrees and actively pursued their profession of choice. 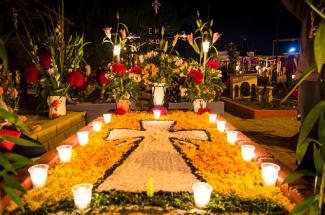 Although the modern Mexican family does not quite follow the traditional guidelines once set by Mexico's pre-Columbian and Catholic forefathers, there are still many traditions that are an important part of family culture. Religious festivities are a staple of family life.

According to Ethnomed.org, the Virgin of Guadalupe is considered the patron saint of Mexico. Every year peregrinaciones are held from the beginning of December to the 12th in honor the Virgin of Guadalupe. People travel not only to the main cathedral built in her honor but to any church or temple dedicated to her.

There are also thousands of towns named after saints, such as San Juan, and each hosts an annual celebration with peregrinaciones for its patron saint. While individuals do attend these celebrations, more often than not, families try to attend together.

Another one of those pre-Columbian traditions accepted by the Catholic Church (by merging it with an existing Christian tradition) is the Day of the Dead is celebrated every November. Families place an altar at home for deceased loved ones and go clean and dress their tombs on November 1 and 2nd. This is a family affair, and it can be a whole family celebration, or a small get together to reminisce and cherish the memories of those who have passed over a cup of hot cocoa and a piece of Pan de Muerto (sugary bread).

Just like towns, many Mexicans have been named after a saint. Consequently, when that Saint's anniversary comes by, the special person is apt to receive phone calls, text messages, and an occasional treat to celebrate.

Young, Mexican females are honored on their 15th birthday with a quinceañera celebration. During the celebration, the girl's father ceremoniously exchanges her flat, childish style shoes for a demure pair of modestly high-heeled shoes to denote her passage into womanhood. The event is full of sentiment as the young woman dances with her father and the guests look on.

Family is still important in modern Mexico. The modern Mexican family keeps many traditional values alive by celebrating them in new ways.

Although extended family households are not the norm, extended family members do tend to live nearby. If families live farther apart, members regularly make trips to visit each other. A weekly dinner, lunch, or brunch where all the family gets together is a common occurrence. These tend to be big convivios (get-togethers) where one big meal is made (such as pozole and other Mexican treats), or everyone brings something to share. Additionally, birthday parties with piñatas and candy, and important celebrations such as quinceañeras, weddings and anniversaries are celebrated together with everyone's extended families.

Expensive education and high cost-of-living mean only upper middle-class students leave their homes to go to college. Rural students may also leave their families in pursuit of an education, but that is more of a sacrifice for a better future than a rite of passage. Most middle-class university students with access to local colleges and universities will continue living with their parents, and many continue to do so even after they graduate and join the workforce. There is not a stigma for living with your parents as there might be in other modernized countries. Many children live with their parents until they get married or have sufficient income to cover the expenses maintaining a household.

Adult children tend to keep close relationships with their parents. Grandparents are involved in the care of their grandchildren, and it is common to see closely knit, multigenerational families that do not share a household but do spend a lot of time together. When parents become elderly, they often move in with their adult children, or the adult children move in with the parents. Who moves where has more to do with economic matters and convenience than preference. Adult children try to take care of their parents for as long as possible and only resort to nursing homes or facilities in cases when the parent is in need of medical attention.

In Mexico, the culture continues to evolve as people from other countries become part of the population and introduce new ways of thinking. GlobalSecurity.org suggests these influences have resulted in attitude changes regarding family relationships, especially between husbands and wives, where the roles are becoming less defined and more flexible.

The Organization for Economic Cooperation and Development (OECD) reports that Mexicans today claim a higher-than-average life satisfaction rating with women experiencing a higher level of satisfaction than men. However, this progression is mainly in the urban parts of the country, and traditional spousal relationships remain popular in rural regions. As with any nationality, individual families have their values, but remnants of the traditional family culture and the importance of family values in Mexico remain in many regions.

Family ties are strong in Mexican culture and have been for centuries. With modernity comes changes, but Mexican families will always be rooted in tradition.