If one festival embodies the Hindu family value of filial responsibility, it is Raksha Bandhan. Otherwise known as Rhaki, after the bracelet that a sister ties to her brother's wrist during this day of celebration, Raksha Bandhan is an ancient tradition. Its purpose is to honor the relationship between brother and sister, symbolizing a sister's need of his protection, and his duty to defend her.

As most holidays do, there are stories and myths associated with celebrating Raksha Bandhan. These stories emphasize devotion between a man and woman.

In Sanskrit, Raksha Bandhan means 'tie of protection.' On this festive day, the sister ties a Rhaki bracelet made of silken threads of red and gold, to her brother's wrist, praying for his health. The brother responds by vowing to protect her. The sentiment is to renew and strengthen the filial bond of peace and love. During the ceremony, sacred verses from Hindu scriptures are spoken.

When Is Raksha Bandhan?

Raksha Bandhan occurs on the full moon during Sravana. This is the fifth month of the Hindu lunar calendar. It stretches from the last week of July to the third week in August.

Prior to the ceremony, before the full moon rises, the sister collects a number of things needed for the ritual:

These things that she gathers are called 'thali.' The family make offerings to their deities and then, as she ties the Rakhi the sister chants a traditional 'prayer' and marks his forehead with kumkum powder. 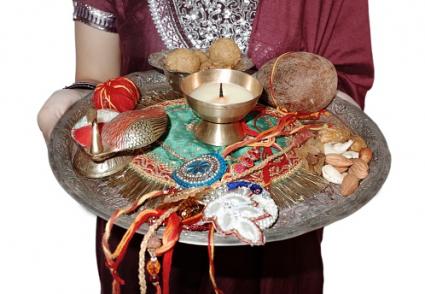 The message behind Rhaki has made it a popular ceremony. Today it is not only siblings who take part. Others use Rhaki as a symbol to bind and defend friends, members of congregations, political leaders, and soldiers.

Once she has tied the Rhaki, it is traditional for the sister to place a piece of candy in her brother's mouth. In return, he will present her with a gift, often something sweet. Nowadays, not only siblings take part; many people exchange gifts on Raksha Bandhan.

The sentiments of Raksha Bandhan make it a jubilant time, and fun to share. It is usual to give cards, sweets, flowers, or small presents. You could even throw a theme party for Raksha Bandhan. Choose traditional Indian music special to the occasion and encourage your guests to try the Bun Chun Chali dance, and dress in traditional Indian clothing. 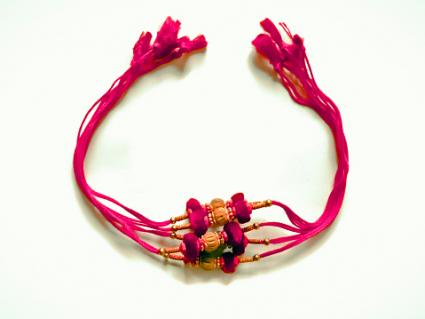 Rakhi bracelets are easy to make and can be as simple as a few threads of red and yellow silk, or ribbon, tied together. For something more elaborate, decorated with beads.

Hindu families have friends and relations living all over the world, so it is now customary to send cards to wish them a happy Raksha Bandhan. You may have noticed cards in gift shops and stationers, but people also make them or send them online.

As with all festivals, Rhaki is celebrated with food, both savory and sweet. There are many traditional dishes, and each family has its own favorites. Confectionary, which contains nuts and aromatic spices, can be cooked at home and makes an appreciated gift. You might like to try out recipes yourself.

No festival would be complete without colorful flowers. They are used to decorate the house and send as gifts. Homemade flowers, constructed from bright tissue paper, are considered just as pleasing as fresh ones.

The sentiments expressed through Raksha Bandhan are those of maintaining family bonds. This is evident in the festival's primary function of binding brothers and sisters. However, there are other factors present. Hospitality is a strong part of the Hindu culture. Guests are sure to receive lavish attention and are treated with respect. If you accept an invitation to attend Raksha Bandhan you will have a warm welcome as an honored guest.